On the 24th of March in NTUU “KPI” was held a seminar with the participation of representatives of the Agency for International Development Cooperation at the Ministry of Foreign Affairs of the State of Israel – MASHAV and international training center “Caramel” to them. GoldaMeir.

The meeting was conducted by trainers of the organizations, mentioned above: Ekaterina Rudenko and Natalia Mazur, as well as coordinator of projects of the Embassy of Israel in Ukraine Olga Tsuprikova. Participation in the seminar was attended by about 30 people, among whom were the chief of department of international projects of the Department of International Cooperation “KPI” Sergei Shukaev, director of the Institute of Postgraduate Education Inna Malyukova, teachers, students and postgraduate students.

At the beginning of the seminar YekaterinaRudenko held a presentation of the Agency for International Development Cooperation at the Ministry of Foreign affairs of the State of Israel (MASHAV). She gave a generalized information about MASHAV program, telling about the program itself, the goals, projects and ways to participate in them.

So, what is a MASHAV? MASHAV is the Agency for International Development Cooperation at the Ministry of Foreign affairs of the State of Israel. MASHAV was founded in 1958 on the initiative of Golda Meir (Minister of Foreign affairs that days) as a center for the dissemination of programs of technical and humanitarian cooperation in the underdeveloped countries of Africa, Asia, Latin America and Oceania.

Remarkably, one of the projects MASHAV currently deployed in four southern regions of Ukraine – Nikolaev, Zaporozhye, Kherson and Odessa. 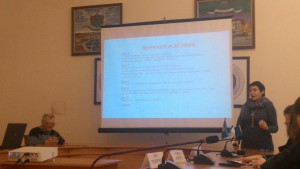 After Catherine had a word Natalia Mazur, who spoke about networking – activity, that is aimed at solving complex problems through the creation and development of a network of friends and acquaintances. In other words, networking is building a trusting and long-term relationships with people for further mutual. Natalia also spoke about the 60-second self-presentation used in networking, and in addition gave few practical tips on the use of techniques, which make the presentation effective.

During the meeting few interesting issues were raised, including the establishment of networking, network among graduates of NTUU “KPI”. In general, from the training conducted by Natalia, we can conclude that today in business it is very important to havecontacts, and the wider the range of these contacts, the more effective it will be possible to develop own business. Based on the position of the participants from the university, we can be sure that the relationship between the agency, MASHAV and the KPI at the meeting is not over –there will continue different kinds of projects in the future, beneficial for both the one and the other side.